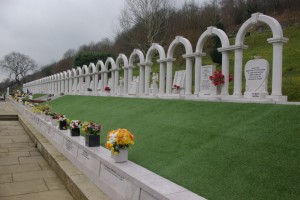 Last week across the country but particularly in Wales we have been thinking of Aberfan and the terrible events that unfolded there fifty years ago. The main emphasis has been on the tragedy of it all and the terribly sad loss of all those children and the implications for their families and friends. In all this, in a way that mirrored the event itself, the National Coal Board has got off rather lightly. Occasionally though criticism has emerged. Midway through Karl Jenkins’ brilliant religious Cantata Memoria – for the children – Bryn Terfel sang: “Buried Alive by the National Coal Board”. Here he was echoing the words of the grieving father driven beyond limits by the coroner’s talk of “asphyxia and multiple injuries” This was not what he wanted on the death certificate of his child, he wanted the NCB to be held responsible. Others agreed and there were cries of “murderers”.

On the day of the catastrophe, it should be remembered, the ex Labour Minister Lord Robens, Chairman of the NCB, was being installed as the Chancellor of the University of Surrey. This event took precedence and he didn’t arrive in South Wales until the following evening. His subsequent behaviour revealed the same lack of care and concern. It was he who first stretched credibility with his claim that the existence of springs underneath the tip was unknown and unknowable. At the Inquiry in Mountain Ash he asserted that he was not a technician and could not be held responsible. After the NCB had been blamed by the Inquiry, he insisted that the organisation would not pay for the removal of the tip. Neither would the Labour Government, this was made clear by the Secretary of State for Wales George Thomas – Lord Tonypandy. The cost would have to be borne by the Disaster Fund set up by the local council, and in an act of dubious legality the fund was raided for £150,000.

Thirty years later another Secretary of State – Ron Davies – fulfilled a pledge to return the money. This was paid without interest, a further slight which was later made good by a donation from the newly devolved Welsh government. In all this time the people of the village were left to deal with things as best they could – with the support of each other, with looks and tears, sometimes in silence, by not talking about it at all. Bereft.

It’s hard to see beyond the tears but in Aberfan we can also find a touchstone to people’s loss of faith in the established institutions of Labour. The Report of the Aberfan Disaster Tribunal spoke of “bungling ineptitude by many men” but no direct blame, no disciplinary action, no prosecutions. Today a charge of corporate manslaughter would certainly have been considered given the chronic disregard for safety that preceded the calamity of 21st October. The events that followed, by adding insult to injury, eroded any meaning from the claim that the NCB was an organisation being run “on behalf of the people”. For many who worked in the industry it was the last straw. The Labour Party too: in 1966 it had polled 60.7% of the vote in Wales but four years later it fell to 51.6% continuing downward to the current low of 36.9%.